In 1969, God brought together three young men, students at Olivet Nazarene College, in Bourbonnais, Illinois to form the Helmsmen. From that point on and in the 1970’s and 1980’s God used The Helmsmen to minister to thousands of people, through hundreds of church services and concerts. Many people were saved and many more were encouraged to continue in their Christian faith. The personnel had a few changes over that time, but the zest for ministry continued. In 1986, the group disbanded so the members could pursue individual and family ministries.

Ten years later, in 1996, God brought two Helmsmen members back together. A few months later after talking together, prayer and auditions, a third gentleman was added and the Helmsmen Trio was back on the road again.

A new chapter was added to The Helmsmen in 2007. Ken and his wife, Lorri, were called to minister at a church in southwest Michigan. This led to the formation of two groups. The New Helmsmen Trio in Upstate New York and The Helmsmen Quartet in Michigan.

Over the years, The Helmsmen have recorded 16 albums. Their travels have taken them to New York, Pennsylvania, Ohio, Massachusetts, New Jersey and Michigan. They have ministered in many different denominations including, but not limited to Nazarene, Baptist, Wesleyan, United Methodist, Christian and Missionary Alliance, Primitive Methodist, and Salvation Army.

Together, The Helmsmen lead a worship service using a variety of musical styles ranging from old time hymns to lively Southern Gospel songs. The concert is rich in professionalism but exalts Jesus Christ as Lord and Savior. 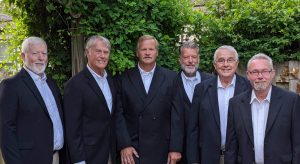 We would love to sing for you in 2022!
If you can use us for a service, concert, or event, please contact us.